Today I’m taking part in this blog tour for a crime story with a dash of Hollywood. Many thanks to damppebbles blog tours for having me on the tour and sending me a copy of the book to review. 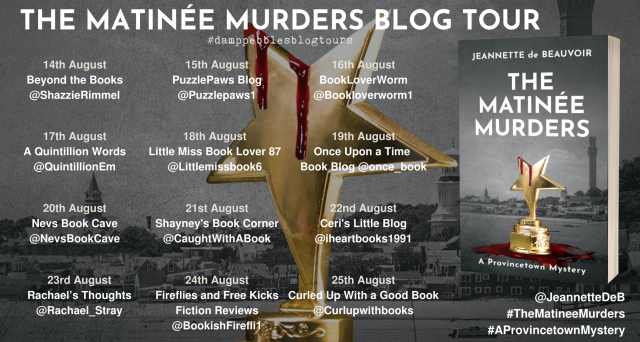 Blurb:  It’s time for the Provincetown International Film Festival, and wedding planner Sydney Riley has scored a coup: her inn is hosting the wedding of the year. Movie star Brett Falcone is to marry screenwriter Justin Braden, and even Sydney’s eternally critical mother is excited. The town is overflowing with filmmakers, film reviewers, film buffs, and it’s all the inn can do to keep up with the influx of glamorous celebrities and host their star-studded events.

But when Sydney opens a forbidden door in the mysterious Whaler’s Wharf, she discovers the body of a producer—and a legion of unanswered questions. Who strangled the innocuous Caroline Cooper? What dark force followed Brett and Justin from LA? Why is her boss Mike tense and double-checking every room at the inn? And is Mirela really leaving P’town forever? Sydney and her boyfriend Ali need to find the answers fast before another victim takes a final bow. 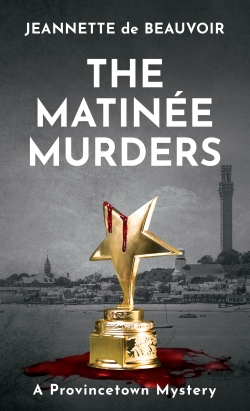 My Review: For some reason I thought this was the second book in the series but a quick search tells me it’s actually book 6. This book can definitely be read as a stand alone which was good news for me, since I’ve not read the previous books in the series. Many of the characters are new and in this book only as they are visiting for the film festival and/or wedding so there’s only a small cast of regular characters and I didn’t feel I was missing out on anything with them having not read any of the previous books.

I really enjoyed this book. I found it a nice, easy read which is exactly what I was needing as my concentration is all over the place at the moment. It was a brilliant book to loose myself in and watch the events of the story unfold. The Hollywood people were mostly, predictably entitled and full of themselves as you would expect and I had fun being irritated by some of them.

I liked the description of the town itself as well, I could easily picture the crowded streets because everyone in the country has arrived for the film festival. The little bit of extra information at the back of the book confirming how much of the town and the people are real was a nice touch and something I really like in books when they are set in real places or are connected to real events.

There wasn’t a lot of description of the main characters but that’s probably because, as I said, this is book 6. However, there was enough for me to get a feel for them and that was all I needed. There are a lot of threads to the investigation and lots of secrets and some people trying to pretend everything is ok when it isn’t. All of the threads came together in the end and while it wasn’t the ending I was expecting I did feel it fitted with the story.

Personally I would put this under the heading of cosy crime, so if that’s something you enjoy then it would be worth checking out this series. I, for one, will definitely be having a look at the other books in this series.

Award-winning author Jeannette de Beauvoir writes mystery and historical fiction that’s been translated into 12 languages. A Booksense Book-of-the-Year finalist, she’s a member of the Authors Guild, the Mystery Writers of America, Sisters in Crime, and the National Writers Union.

All her novels are firmly rooted in a sense of place, and her delight is to find characters true to the spaces in which they live. She herself lives and writes in a cottage in Provincetown, on Cape Cod, Massachusetts, and loves the collection of people who assemble at a place like land’s end.

Find out more (and read her blog and sign up for her newsletter) at jeannettedebeauvoir.com. You can also find her on Facebook, Instagram, Patreon, Medium, and Goodreads.