I’m thrilled to be re-posting my review of Too Close to Breathe today to coincide with the paperback publication of this fabulous book. The next in the series is out in April and I can’t wait to read it.

Blurb:  Detective Frankie Sheehan is recovering from a violent knife attack and dealing with the first awakenings of post-traumatic stress disorder when she’s called back to work. At first, Eleanor Costello’s death looks like suicide but soon the perfect pieces of Eleanor’s life begin to fracture, sending Sheehan and her team into a complex murder investigation for Dublin’s deadliest killer. The case deepens as does the body count and Frankie is forced to confront her own demons as the lines between victim and killer become increasingly blurred. 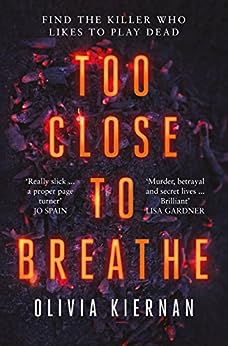 My Review:  Where to start with this book! I really enjoyed this story and I’m not a big reader of police procedural’s where a woman is the lead detective. I have nothing against them, I’ve just never read very many of them. From the very beginning the story began drawing me in. We start with something that looks like a suicide but Frankie Sheehan is not convinced, and it doesn’t take much for her to question the suicide determination. It soon becomes clear that it was definitely murder, but then this raises the obvious questions of who and why.

At this point the investigation really begins and it’s clear that a lot of research has got into this story. The detail and depth that the investigation goes into was something else that drew me in, I wanted to know the results straight away, what was happening and what the detectives were going to do next. I’ve never thought police work was a 9-5 job but in this story the fact that it was almost 24 hours especially in the first few days came across really clearly and I began to wonder if anyone was getting any sleep at all.

The investigation becomes quite intense at times and with Frankie being the main character the reader obviously spends a lot of time with her. We get to see how she copes under pressure, and how she doesn’t. I particularly liked the little parts away from the investigation like Frankie tending her bonsai tree. Those small scenes were almost an oasis of tranquillity and calm in the depth of mystery and unanswered questions that was the police investigation.

The only thing that didn’t sit well with me was the ending, I found it a little rushed but the rest of the book was strong and definitely a gripping read.

I’m not sure how many books are planned for this series but I know the second one is out in 2019 and I, for one, am really looking forward to reading it.

About the author:  Olivia Kiernan is an Irish writer living in the UK and author of crime thriller, Too Close to Breathe. She was born and raised in County Meath, near the famed heritage town of Kells and holds an MA in Creative Writing awarded by the University of Sussex. Olivia’s second book, The Killer In Me, will publish in April 2019.
http://www.oliviakiernan.com
Follow Olivia on twitter @LivKiernan