I know, I know, everyone else on the planet read these books years ago and I’m incredibly late to the party but better late than never surely??  Many, many thanks to Netgalley and Hodder & Stoughton for making this book available again because of the recent release of Iron Gold (Red Rising book 4).

Blurb:  Darrow is a helldiver. Born to toil beneath the surface of Mars so that one day future generations might live above it.

But Darrow and his kind have been betrayed. Humanity reached the surface generations ago, and his people are nothing more than slaves to a decadent ruling class.

Now Darrow will stop at nothing to bring down his enemies . . . even if he has to become one of them to do so. 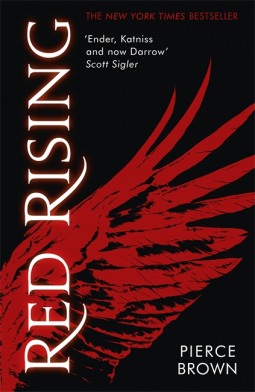 Review:  So, I’ll be upfront here, I loved this book!  In fact I loved it so much that I couldn’t concentrate on anything else once I’d finished it so immediately bought and read book 2 (review coming soon) because it was the only thing I wanted to read.  I’ve also bought book 3 but am holding off on that because I don’t want to get into the position of reading book 4 and then having to wait months to find out what happens next.

As I’ve said in another review, fantasy is not a genre I read much of, sadly neither is sci-fi at the moment, but despite that this book grabbed me from the first page and wouldn’t let me go.  The characters are all richly detailed without extraneous detail used on those who are only in the story for a page or two.   I felt like I was with Darrow every step of his journey, felt every emotion he felt and wanted the same goals as he did because I could understand why they were so important to him.

The locations, while not obviously places we are familiar with, felt alive to me, the descriptions were so clear and well-written.  I read this story on my kindle and have since bought the paperback and therefore seen the map that is in it, something I didn’t have in my ebook.  The descriptions were so clear throughout the story that my imagined layout that I had in my mind was almost identical to the map in the book, that’s how good the writing is.

This isn’t a non-violent book but I felt the violence there was fitted with the story.  It’s also not a book with a complete ending as it is the first in the series, however, the ending does tie things up to an extent so there is a feeling of an ending of sorts which I liked and don’t always get with books that are part of a series.

If you’re one of the few people on the planet who have not yet read this book then I would urge you to give it a go.  It might not be your usual genre but why not step outside of it and try something different.  Life can be boring if we never try new things, at least occasionally.

For anyone who wants a fast paced, well-written read that will keep them glued to the book for hours then I highly recommend this one.  The only regret I have in reading this book is that I didn’t do it sooner.