I am excited to be taking part in this blog tour today.  Unfortunately I haven’t had a chance to read the book yet, it’s on my list!, but having read the blurb and the guest post I know it’s a book I’m going to enjoy.  I love the Stephanie Plum novels and was a huge fan of the tv series, The Mentalist and given Marianne cites those as part of the inspiration for Tara this is definitely a series I want to get involved in.

Blurb:  Tara’s unconventional PI business takes advantage of her uncanny ability to read people’s auras – meaning she’s got a little more than the typical boy, money and parent problems. Following some close-shaves with some dangerous characters in Perth, Tara jumps at a music promoter’s offer of a gig taking care of a difficult rock star performing in Brisbane.  She’s a sucker for a backstage pass, and it’ll give her respite from her mother’s not-so-subtle hints about ‘eligible young men’ and ‘suitable jobs’ – not to mention putting some much-needed distance between herself and crime lord Johnny Viaspa.

The music industry is more cut-throat than she could possibly have imagined and she soon finds the artist’s demands and his crazy fans are the least of her problems. As she uncovers old grudges and the involvement of some people who’d rather see her dead, Tara finds herself in a race against the clock to figure out exactly how deep she is. 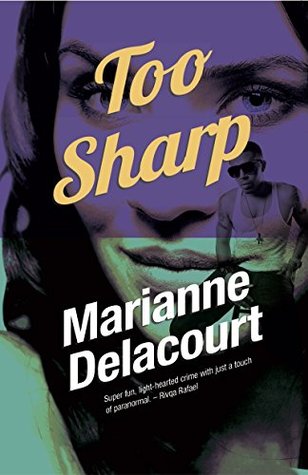 Guest post by Marianne Delacourt:  ‘What was your inspiration for creating Tara and why did you decide to give her the ability to read other people’s auras?’

So this is the truth. Pinky swear…

I used to be terrified of flying and I found that the only books that could keep me distracted on a flight were the Stephanie Plum novels by Janet Evanovich. The series had such good narrative energy and engaging characterisation that it held my attention when all other books left me glancing anxiously out of the window. I’d also just finished writing a very exhausting four book feminist sci-fi space opera and I was looking for a change of genre. Those two factors seeded the gestation of Tara Sharp.

But as I set out to write the first novel, I realised I was looking for something a little different to hang the series on. I’d always been particularly fascinated by body language and began reading about it in earnest. When Sharp Shooter was first released there were a few psychic shows on television like The Mentalist and Medium, but there weren’t a lot of books in the crime genre that played with those ideas. (I think there are more now.) As I was researching body language, I suddenly remembered that as a teenager we used to spend lunchtimes at school standing up against a big white door trying to read each other’s auras. I widened my reading and was fascinated to see there was a whole lot of new age material on just that topic. But instead of borrowing someone else’s interpretations of auras, I created my own colour meanings. It was by far one of the most enjoyable things I’ve ever done as a writer!

It’s not the first time that events from my school days have intersected with current interests to create a story. My entire Night Creatures YA series was based on a similar collision of ideas: nocturnal lifestyles and island life.

But the thing I love most about writing the Tara Sharp series, is the secondary characters. I have such a good time hanging out with them and exploring their eccentricities: Aunt Liv, Wal, Cass and even Tara’s parents (known to her as the single entity) JoBob. Exploring their quirks and their humanity gives me a warm feeling inside.

The third novel in Marianne Delacourt’s series of paranormal crime novels about unorthodox PI Tara Sharp, ‘Too Sharp’, launched this week. The novel is available from all online retailers, including Twelfth Planet Press and Amazon. Readers new to Delacourt’s Tara Sharp series can spark their addiction with ‘Sharp Shooter’, the ebook of which is available for free for a limited time to celebrate the launch.  Please note this book was originally released under the title  ‘Stage Fright’.

Author:  Marianne Delacourt is the alter ego of award-winning, internationally-published Science Fiction writer Marianne de Pierres. Renowned for dark satire in her Science Fiction, Marianne offers lighter, funnier writing under her Delacourt penname. As Delacourt, Marianne is also the author of Young Adult fiction series Night Creatures (Burn Bright, Angel Arias and Shine Light). She is a co-founder of the Vision Writers Group and ROR – wRiters on the Rise, a critiquing group for professional writers. Marianne lives in Brisbane with her husband and two galahs.