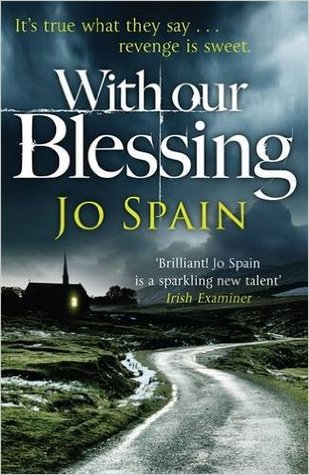 1975. A baby, minutes old, is forcibly taken from its devastated mother.

2010. The body of an elderly woman is found in a Dublin public park in the depths of winter.

Detective Inspector Tom Reynolds is working the case. He’s convinced the murder is linked to historical events that took place in the notorious Magdalene Laundries.

Reynolds and his team follow the trail to an isolated convent in the Irish countryside. But once inside, it becomes disturbingly clear that the killer is amongst them . . . and is determined to exact further vengeance for the sins of the past.

With Our Blessing (Book 1) Amazon UK

Beneath the Surface (Book 2) Amazon UK

Review:  This is the first in the Tom Reynolds series and the first book by this author and it is an impressive debut.  I’ve read very few books set in Ireland, and for some reason have now read two in the same year and I know they won’t be my last.  Both have, in their way, been historical and crime fiction, the first being the stunning Irish Inheritance by MJ Lee reviewed here, and the second being this, and both have hooked me but in completely different ways.

With Our Blessing is a story that takes an unflinching look at the horrors of the Magdalene Laundries, something I knew of from the film, but nothing more.  Having said that it is not all doom and gloom, it deals very delicately and compassionately with what is a sensitive subject for many.  The story begins with the finding of a body in a park which then leads into the countryside and then the connection with the Laundries appears.  To say more would spoil it so I’ll leave it for you to read and find out for yourself……..

Tom Reynolds is a well-written and well-rounded character. I liked him and his partner immediately and felt quite comfortable with him leading the investigation.  For some reason, he reminded me a little of Inspector’s Morse and Barnaby (Morse and Midsomer Murders respectively) in that he was solid and dependable and I like that in my fictional detectives.  He has a family life that is not perfect but not the tortured life that some police characters these days have and, while I don’t mind those, this was a refreshing change.  There was a nice amount of background to his colleagues, their families and how they reacted to each other and that gave a bit more depth to them as a detective team.  There is a second book in this series published last month (which I thankfully have in my tbr pile!) and I can see that the background to the characters in this book not only helps us understand them and their relationships here but will also give them greater depth in the second book.

This is definitely a whodunit but it also asks the question why, why did they do it and why now.  This story is all about the characters. Don’t misunderstand me, there is a very clear plot which flows through the whole thing but the characters are what drives it, their actions and personalities are what makes the story flow and what made me really enjoy it so much so that I read it in 2 days and I’m really looking forward to reading the next one.

One thought on “Review of With Our Blessing by Jo Spain”