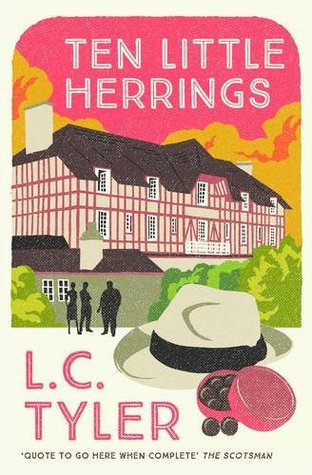 Blurb:  When obscure crime writer Ethelred Tressider vanishes, his dogged literary agent, Elsie Thirkettle, is soon on his trail. Finding him (in a ramshackle hotel in the French Loire) proves surprisingly easy. Bringing him home proves more difficult than expected – but (as Elsie observes) who would have predicted that, in a hotel full of stamp collectors, the guests would suddenly start murdering each other? One guest is found fatally stabbed, apparently the victim of an intruder. But when a rich Russian oligarch also dies, in a hotel now swarming with policemen, suspicion falls on the remaining guests. Elsie is torn between her natural desire to interfere in the police investigation and her urgent need to escape to the town’s chocolaterie. Ethelred, meanwhile, seems to know more about the killings than he is letting on. Finally the time comes when Elsie must assemble the various suspects in the Dining Room, and reveal the truth.

Review:   Until a few days ago I had spent hours each week commuting to work and had realised that an excellent way of passing the times was to listen to audiobooks while I drove.  When my last book finished I decided to choose this one next despite having not read the first book in the series (it’s on my kindle waiting for me!).  After my last audiobook, which was an excellent psychological crime novel, I was in the mood for something a bit lighter and this fit the bill perfectly.

Within minutes of starting the book I was laughing at the thoughts and antics of Elsie and Ethelred and so began what can only be described as a rollicking good read (or listen in my case).  The story never takes itself too seriously and that is why it works, between Ethelred’s constant disapproval of Elsie’s antics and Elsie getting herself into trouble over her obsession with chocolate it’s a never ending ride which had me stunned into disbelief one minute and laughing out loud the next.

The story has the usual type of characters you expect to see in a Marple or Poirot novel, from the suspicious one who simply looks like a murderer to the ones who appear suspect simply because they say very little and aren’t keen on being questioned by Elsie. She spends a lot of the book trying to figure out who the murder(s) is/are and the rest of it trying to get more chocolate which is made tricky by the fact that the police stop the guests/suspects from leaving the hotel, cue some hilarious and cringe-inducing but dramatic scenes.

I really enjoyed this book and the narration. The narrator did a good job of the different voices and accents along with conveying the incredulity that Elsie often had and Ethelred’s many feelings about Elsie’s behaviour.

I would recommend this to anyone who enjoys a murder mystery but wants something with a bit of fun and lightness to it. Now I just need to make some time for the other books in the series!